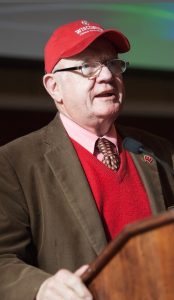 “It is what it is” was a favorite maxim of Wade’s. While it connotes a level of acceptance, this belied Wade’s relentless pursuit of improvement. Wade ceaselessly lobbied, persuaded, and inspired people to do better. To be better. He was always optimistic that we could do more. He was creative in his solutions and his philanthropy was always centered on sharing big ideas and promoting independent thinking while helping those less fortunate.

Wade was instrumental in helping Barry Alvarez turn the UW Athletics program around. He often described sports as the front porch of the university, saying “It’s our job to draw people into the house and academics!” He worked tirelessly on behalf of the Economics Department, making introductions and connections, all while sharing his love of Wisconsin Football, often welcoming alumni and faculty to join him at games.

Former chair of the Economics Alumni Board, Todd Warnock described how Wade drew him into the Badger Family: “I have never met a more enthusiastic and committed alumnus for any educational institution than Wade Fetzer. I would not have been remotely as engaged in UW if it were not for Wade. And it has been amongst the most rewarding experiences of my life.”

As any true leader does, Wade lead by example and from out front. Wade epitomized the saying “If you want to be a Badger, just come along with me….”. He appreciated the relationship between the University and its people, and the possibilities of what we can achieve together.