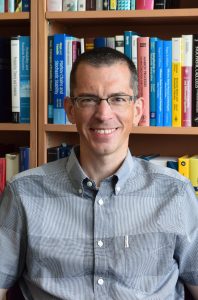 A graduate of Dartmouth College and Northwestern’s Kellogg School of Management, Bill joined the UW-Madison Economics Department in 1998 and remained here throughout his distinguished career. Bill was known throughout the profession for the brilliance of his research as well as for his kindness, approachability, and support for younger scholars. He was a passionate teacher to undergraduates and graduate students; a beloved colleague and collaborator; a valued mentor to younger faculty; and a dedicated advisor to several cohorts of game theorists. After years of struggling with depression, Bill ended his life earlier this week.

Bill was a world-renowned scholar of evolutionary game theory, an approach to studying the behavior of large populations of agents. The methods he introduced help to make predictions without strong assumptions about agents’ rationality and knowledge of the environment in which they interact, and his contributions have been applied in economics, biology, computer science, transportation science, engineering, and control theory. In 2010, Bill published the book Population Games and Evolutionary Dynamics with MIT Press, which synthesized the interdisciplinary research on evolutionary game theory and applications (beginning with its roots in biology) and has become the bible of the field. Along with many influential papers, Bill also co-wrote a statistics textbook, Vital Statistics (2018, Oxford U Press), and posted lecture notes and software on his website as public goods.

Colleagues knew Bill as “a genuine scientist; detail-oriented, open-minded, and uncompromising in the pursuit of truth,” “a humble scholar with an enormous love for research,” “an exceptional human being, generous with his time,” “kind and supportive to all, and a cherished mentor.”

“Having known Bill throughout my entire time at Wisconsin, this is a deep personal loss for me, as I know it is for many others,” said Ananth Seshadri, Chair of the Department of Economics. “Bill was an exceptional economist and one of the best-known evolutionary game theorists. He was a great teacher, an incredibly dedicated advisor to his students, and truly one of the kindest people in the profession. This is an extremely sad loss for all of us.”

Bill took especially seriously his role as an advisor, following and supporting his students closely even after they left the program. One former advisee, now a tenured professor, recalled how welcoming and encouraging Bill was when they first met and lauded Bill’s influence on his research. “He was a true mentor for my entire career. Without him, I could not be who I am now.” Another recalled how generous Bill was with his time, and observed, “While in Madison, I took his advising style as standard. Over time, I’ve learned that it is not.”

Provost John Karl Scholz, Bill’s former colleague in the Economics Department, said, “Bill was a great economist and a wonderful colleague. He was kind, calm, wicked smart, and always gentle. The economics department at UW-Madison has lost a treasured colleague. For all those who knew Bill, he generated light. With his passing, our world is a little darker.”

Bill was an associate editor or advisory editor at eight journals and a member of the Council of the Game Theory Society. His work was frequently supported by National Science Foundation and other grants, and he received numerous awards and honors recognizing the impact of his contributions to game theory and evolutionary game theory.

To those who worked with him, Bill was a treasured colleague and friend. Said one colleague, “I can’t think of Bill without picturing his wry smile, like you were in on a joke together.” Said another, “I will remember him as full of life: a squash player, a traveler, a skier, and a passionate reader, always ready to tell a joke or an anecdote.” Another said simply, “We will miss him greatly.”

Bill is survived by his wife, Leah, and daughter, Lily. In lieu of flowers, donations can be made to support the UW-Madison Arboretum, a place Bill loved, via the Friends of the Arboretum Fund: https://secure.supportuw.org/give/?id=731eddd6-ae01-4dfa-8bda-88a49ec43755